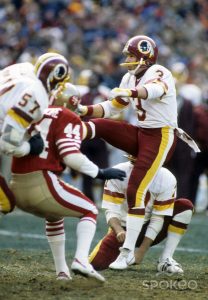 Mark Moseley is the only placekicker to win the NFL MVP award. A Super Bowl champion and two time pro bowler, Moseley is the Redskins all time leading scorer with 1207 points.  Coming out of retirement to join the Fredericksburg Generals, he became the football player to win both the Super Bowl and the Minor League National Championship.

He has been named to the Redskins’ Ring of Fame as well as one of the top 80 players in the franchise’s illustrious history. He currently is the director of franchising for Five Guys.