Jamie King is a 25 year broadcast veteran of radio and television. He hosted the Mark Rypien Show on the Home Team Sports (currently Comcast SportsNet) with former Super Bowl MVP Quarterback Mark Rypien of the Washington Redskins. He has appeared in segments on the USA Network as well as FOX Television in Washington, D.C..

He has hosted numerous radio shows as well and is currently the host of the Sports King radio program which airs simultaneously on ESPN Radio and on 950AM throughout Central Virginia. King has interviewed some of sports all time greatest athletes including Wayne Gretzky, Bo Jackson, Michael Jordan and Cal Ripken Jr.

King was the Head Coach of the Fredericksburg Generals minor league football team, leading them to a National Championship in 1996 while posting a 13-0 record. King recruited and coached the 1982 NFL MVP, former Washington Redskins Kicker Mark Moseley, to play for and mentor the Generals as they made their way to a national championship.

Jamie was voted the National Coach of The Year for the American Football Association in 1996, and was inducted into the Mason-Dixon Football League Hall of Fame in 1998.

Jamie is married to Denise, and they have 2 children and three grandchildren.  He is still a proud resident of the Fredericksburg area. 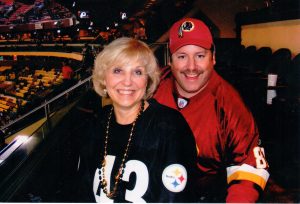